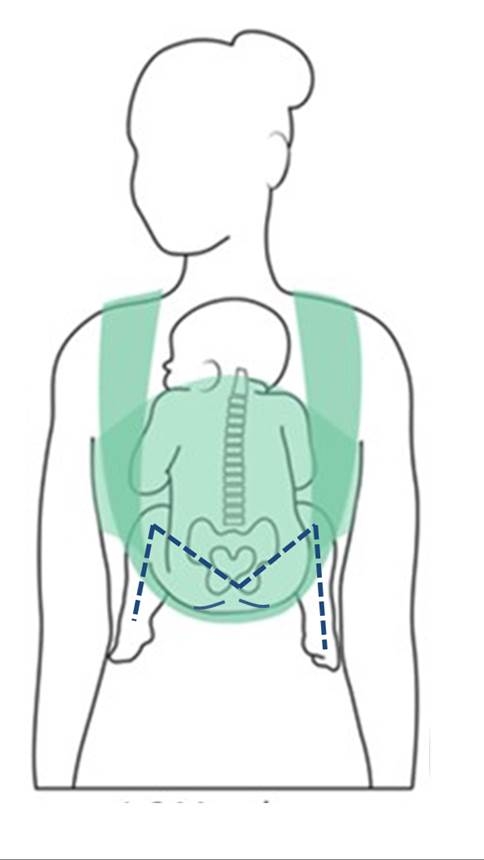 After birth, it takes several months for the joints to stretch out naturally. Babies that have been in the breech (bottom first) position may need even more time to stretch out naturally. The hip joint is a ball and socket joint. During the first few months of life the ball is more likely to be loose within the socket because babies are naturally flexible and because the edges of the socket are made of soft cartilage like the cartilage in the ear. If the hips are forced into a stretched-out position too early, the ball is at risk of permanently deforming the edges of the cup shaped socket (hip dysplasia) or gradually slipping out of the socket altogether (hip dislocation). Hip dysplasia or dislocation in babies is not painful so this may go undetected until walking age and may also result in painful arthritis during adulthood. The risk of hip dysplasia or dislocation is greatest in the first few months of life. By six months of age, most babies have nearly doubled in size, the hips are more developed and the ligaments are stronger, so are less susceptible to developing hip dysplasia.

The most unhealthy position for the hips during infancy is when the legs are held in extension with the hips and knees straight and the legs brought together, which is the opposite of the fetal position. The risk to the hips is greater when this unhealthy position is maintained for a long time. Healthy hip positioning avoids positions that may cause or contribute to development of hip dysplasia or dislocation. The healthiest position for the hips is for the hips to fall or spread (naturally) apart to the side, with the thighs supported and the hips and knees bent. This position has been called the jockey position, straddle position, frog position, spread-squat position or human position. Free movement of the hips without forcing them together promotes natural hip development.

Some types of baby carriers and other equipment may interfere with healthy hip positioning. Such devices include but are not limited to baby carriers, slings, wraps, pouches, car seats, exercisers, rockers, jumpers, swings, bouncers and walkers, and molded seating items. These devices could inadvertently place hips in an unhealthy position, especially when used for extended periods of time. Any device that restrains a baby’s legs in an unhealthy position should be considered a potential risk for abnormal hip development. It is also important to assess the size of the baby and match the device and carrier to the size of the child so that the hips can be in a healthy position during transport. Parents are advised to research the general safety and risks of any device they wish to use. When in doubt, we recommend involving your primary health-care provider in any further decision-making that may be medically relevant.

These series of drawings demonstrate typical devices that allow healthier hip positioning in comparison to those which do not.

Thigh is supported to the knee joint. The forces on the hip joint are minimal because the legs are spread, supported, and the hip is in a more stable position.

Thighs spread around the mother’s torso and the hips bent so the knees are slightly higher than the buttocks with the thighs supported.